Horatio Ross was born at Rossie Castle, Forfarshire near Montrose about 35 miles northeast of Dundee, Scotland on September 5, 1801. He was the son of Hercules Ross and Henrietta (nee Parish) Ross and named for his godfather Lord Horatio Nelson. Hercules Ross and Lord Horatio Nelson corresponded over the period 1780-1802 and their letters are in the Archives of the Royal Naval Museum.

Horatio Ross joined the 14th Light Dragoons in 1821 and retired as Captain in 1826. He won large sums in prizes for shooting (Gilbert 2010) and steeple chasing. He became a member of Parliament for Aberdeen in 1831 and in 1834 he married Justina Henriette, daughter of Colin Macrae, Chief of the Clan Macrae. They had five sons, three of whom competed with their father as four of the Scotch eight competing with the English for the International Trophy, the Elcho Shield. Horatio Ross was so often successful and so highly regarded that the British NRA honored him with some long range shoots at Bisley Ranges. Holland and Holland named a Rook rifle model for him.

In obituaries published December 7th (The Scotsman) and 9th (The Highlander) 1886 he was described as, “…one of the best athletes and sportsmen of his day in the early part of the present (19th) century.” And as, “a shot without equal.” And as, “one of the best riders of the day.” It was also reported that he won the first steeple chase on record, that he together with three of his five sons was part of a team of eight shooting for Scotland in 1863, and that he was regularly out on the Glorious Twelfth of August for the opening of the grouse season. In a letter to an old friend he said that he was preparing for his 69th consecutive 12th. A keen deer hunter, he shot his last stag in the season of 1884 when he was in his 83rd year. Prior to that he had once taken eight deer in twenty minutes, and once taken thirteen deer with fourteen shots.

In addition to hunting, fishing, target shooting and steeple chasing, Horatio Ross was a passionately keen amateur photographer. He was a daguerreotypist from 1847, and a calotypist from 1849. He was taught the calotype process by James Ross. He helped to establish the Photographic Society of Scotland, and he became the Society’s Vice President from its foundation in 1856. He led the case for the amateur photographers in the Society at the Special General Meeting in 1858 when there was rivalry between the amateur and Professional members.

The original Henry records for the lovely rifle number 3575 under consideration here verify that it was sold to Captain Horatio Ross on the 8th June 1875. It is listed as a ‘Best’ quality single shot .450 Express with thirty two inch full rib, 14 5/8 LOP, 1 11/16 DAC, 2 ¼ DAH, and pistol grip. Alexander Henry was one of the very best gun makers of his day. Everything he turned out was handsomely crafted with great attention to detail. “The lock, action, barrel and furniture look as if they have been nailed to a tree and the wood grew around them, so expert is the fit.” (Winfer 1979:78).

Alexander Henry petitioned for patent protection and was granted Patent No. 1071 April 17th, 1865. His outside hammer, back action lock, falling block action is similar to the Sharps system, but in my opinion it is simply elegant by comparison. One of us once traded a Sharps Business rifle with Freund ‘More Light’ sights for the first of several Alexander Henry falling block rifles that he has owned. There is no accounting for impulsive action, is there?

Was Horatio Ross impulsive when he block stamped QUEEN OF THE FOREST on the right side of the rifle stock? That he thought highly of the rifle and used it very well is manifest in his correspondence. First, a letter to Alexander Henry written in June 1876 (Walsh 1882: 23b) :

“Dear Snowie,
You like to hear of anything connected with Highland sport. I therefore send you a very curious account of what occurred last Monday to me. I may say that I do not recall anything like it during the more than half a century that deerstalking has been my favorite sport. I was stalking three stags and slowly slipping down a hill when two sheep saw me. The stags saw the sheep and knew at once that danger of some sort was near and from their manner it was evident that they were about to bolt. They were a long way off but I had confidence in my Henry rifle. I fired at one whose horns were clear of velvet. To my surprise they never moved. I fired again at the same stag, then they started at a gallop. The stag I had shot at, after going about thirty yards fell down dead. On going up to him I found that both my bullets had hit him, one passed through the liver, the other through his heart and the two bullet holes were not more than four inches apart. There is no great merit or difficulty in hitting a stag standing steadily broadside although the distance was considerable (200 yards by measurement) but that he should not have moved after a bullet has passed through his body is quite unaccountable….”

Let the reader note that Ross was in his 80th year and the iron sights on the rifle are not user friendly to such chronologically enhanced eyes.

However, Ross had exceptionally good vision as demonstrated in his ability as a pistol shot. He killed 20 swallows one morning before breakfast, most of them on the wing. He was in fact known to be the best pistol shot in all of Europe. In an interview with Sir Henry Halford in 1893, Halford recalled “So great was he with the use of a pistol that a Spaniard came over specially to study his methods,querying whether Ross was as proficient with the weapon as avowed. A match was arranged between the two men with dueling pistols – the distance being twenty yards, and the target a bull’s-eye, the size of a sixpence (.764 inch diameter). The Spaniard hurried off home after seeing Ross hit the bull’s-eye with twenty consecutive shots.” Ross was chosen to act as Second in 16 duels and was always successful in dissuading the combatants from carrying them out.

So, it is with great pleasure that we present to the readers of the Black Powder Cartridge News this thumbnail biography of a remarkable rifleman and his Queen of the Forest. 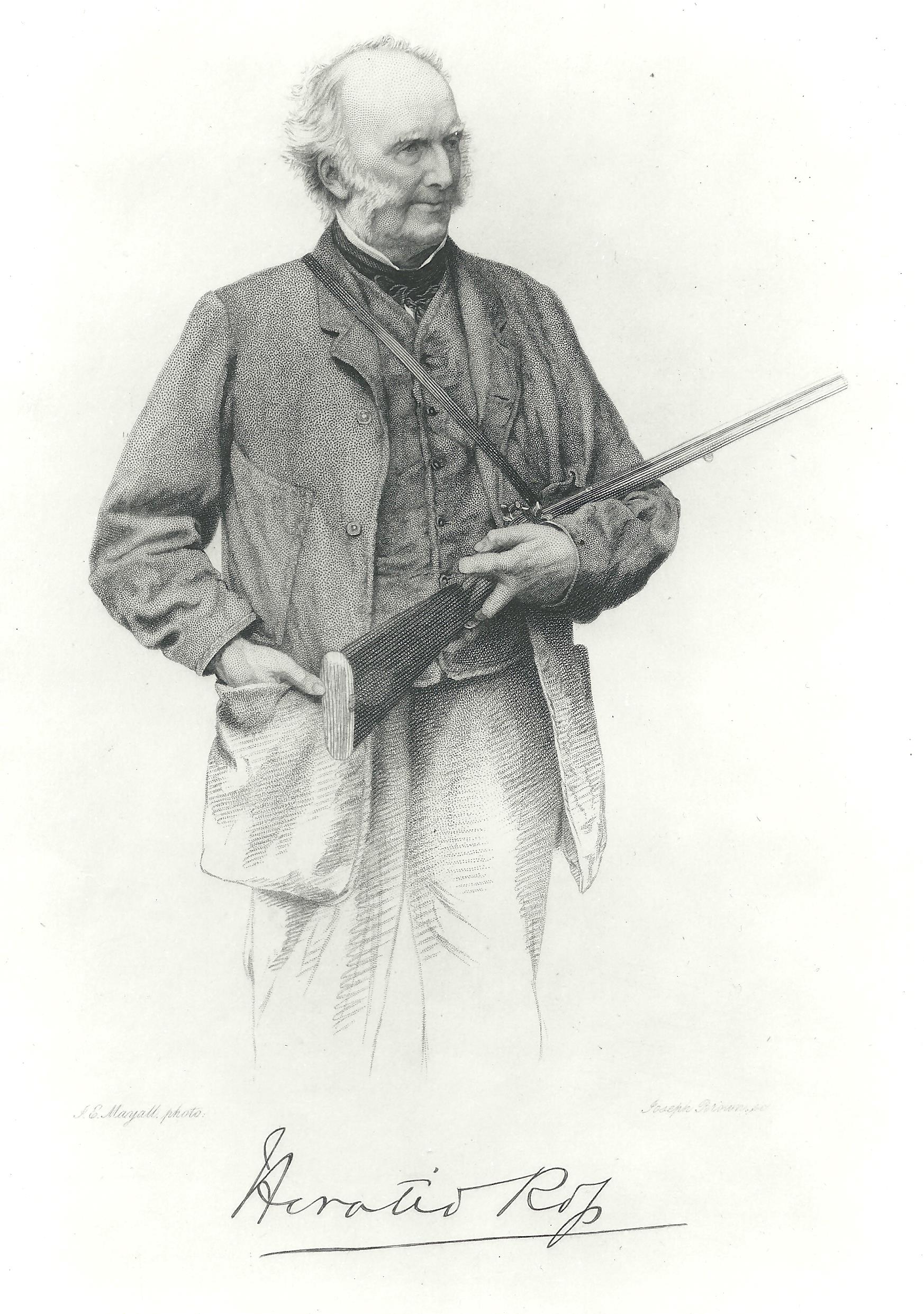 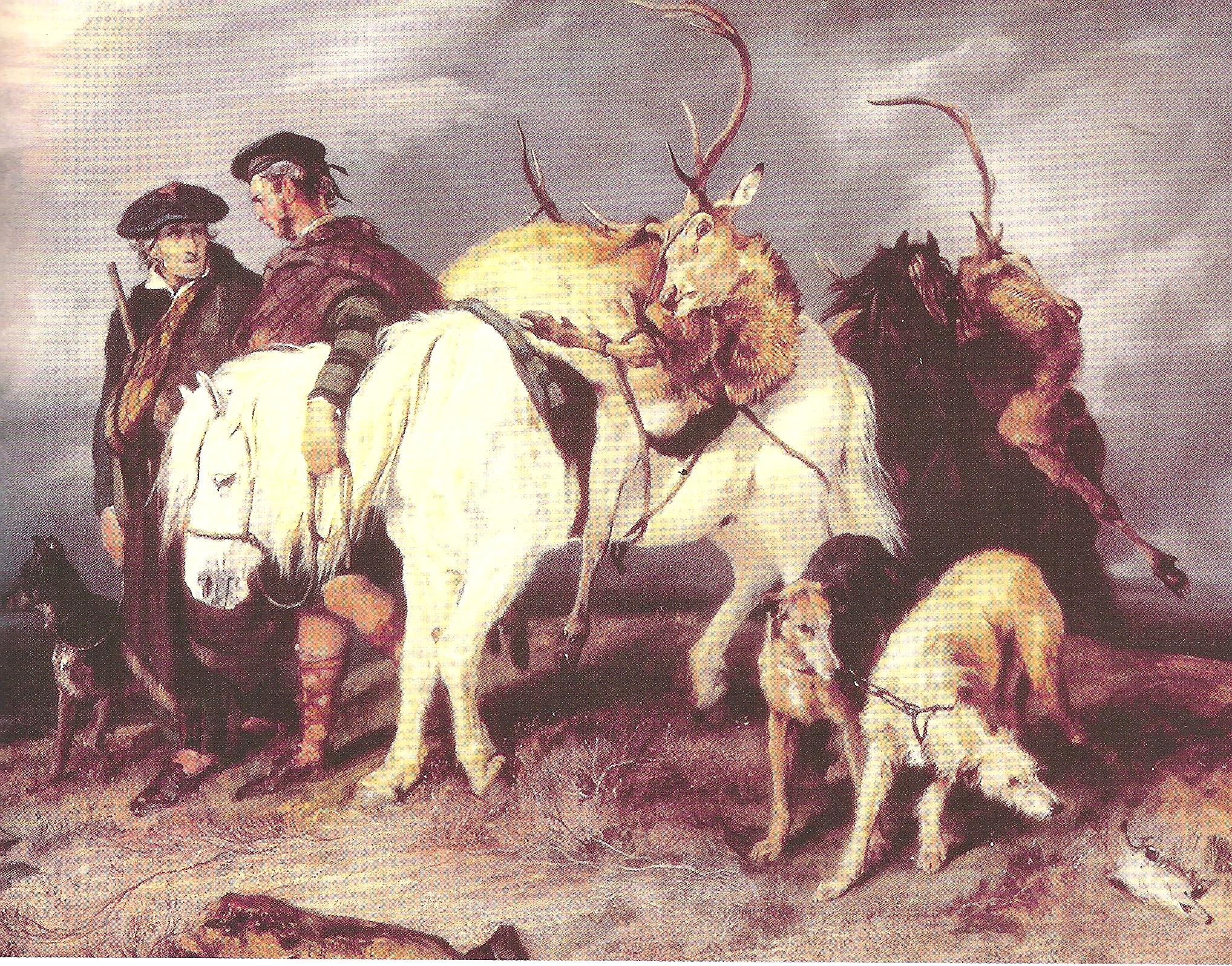 Sir Edwin Landseer was a close friend of Horatio Ross, who along with Queen Victoria, was one of his wealthy patrons. According to Ormond (2005: 70), Landseer painted Ross in hunting scenes such as this one. 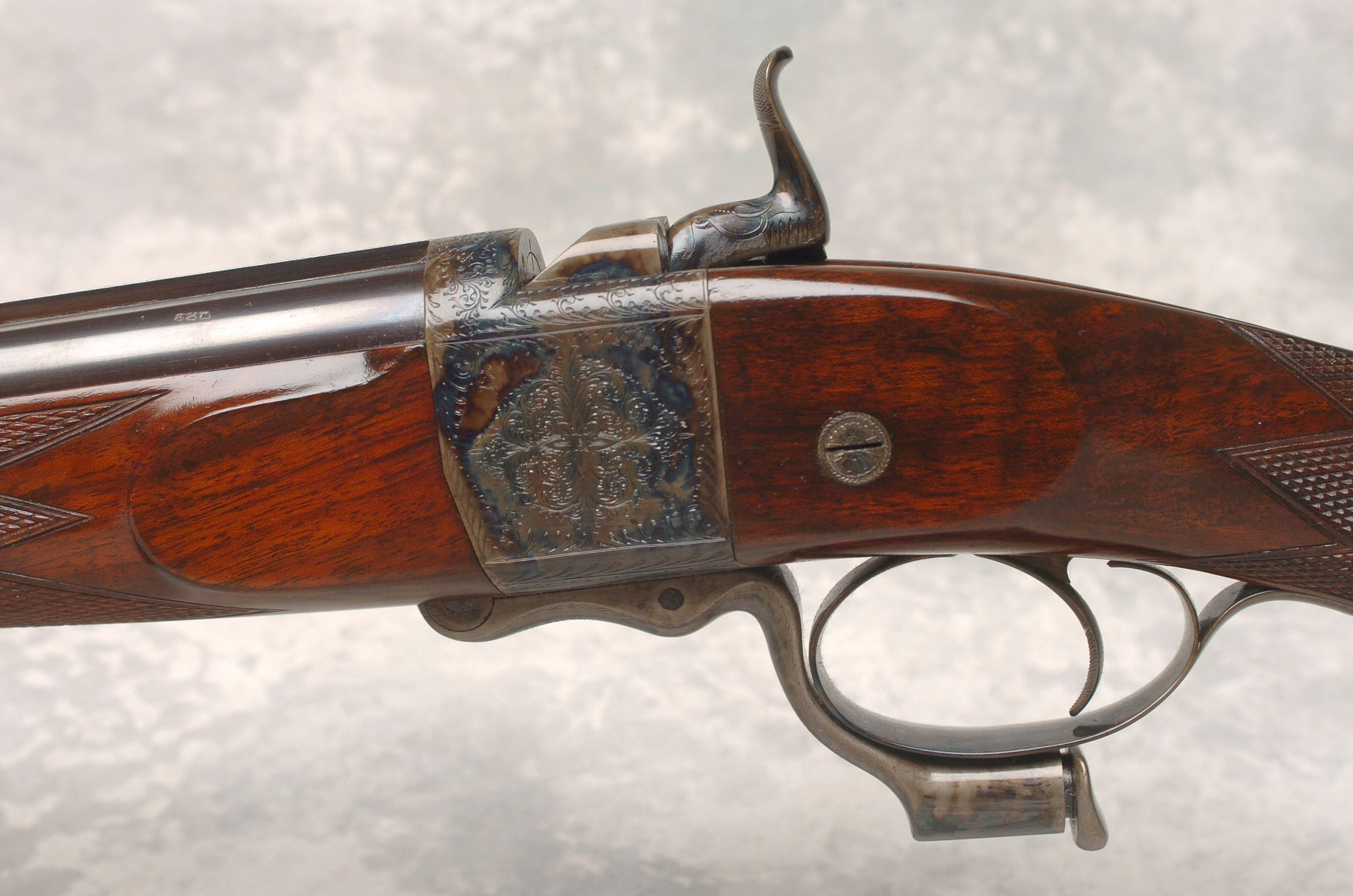 Ormond, Richard THE MONARCH OF THE GLEN Landseer in the Highlands. National Galleries of Scotland, 2005.