Not many people in the West know of it’s existence – a best gun made completly in Russia by master craftsmen: The Russian Purdey, as it’s often called. Read what Aleksey Morozov, gun writer and hunting journalist can tell you about these amazing guns and enjoy the pictures of an outstanding example of Russian guncraft, kindly given by our friend Sergey M.

Normally, producing a gun designed by someone else, especially without permission, dents in a manufacturer’s reputation: “they made a copy of …” sounds almost like an insult. But there are patents that are exception from this rule. The Beesley self-opening patent, made famous by J. Purdey & Sons is one example – making a copy of it could be worn as a badge of honor. Because only the best can.

ЦКИБ СОО (TsKIB SOO), of Tula, USSR/Russia, was one maker that could and did. The outlet was founded in the late 1940s as a research and design bureau for hunting and sporting arms (the name is an abbreviation of the Russian words to that effect). A few years later it was merged with the gunmaking school of TOZ (Tula Arms Works), one of the world’s oldest firearms manufacturers. The result was a full-fledged custom and bespoke gun and rifle maker, that did not only develop new designs and trained artisans in the traditional gunmaking specialties, but also made guns for competitive shots, VIPs, and just hunters.

TsKIB’s job was to develop and make the best guns, and it’s small wonder that they turned to the design that many gun authorities called the finest shotgun action ever – Beesley’s 1880 patent made famous by J. Purdey & Sons. The first TsKIB’s gun made on this action was known as ТС-2, an abbreviation for Тульское садочное (Tula Live Pigeon Gun) [model] 2. As Igor Karklinsh (to whose research every modern writer of Russian hunting guns is heavily indebted) points out, it wasn’t a “model” in the strict sense of the term, but rather a sequence of individual guns, each differing from the other in minor details. Many of those details would not be typical for a Purdey – not all were “stocked to the fences”, for instance. But all featured the major aspects of Beesley’s patent, and it’s not always easy to differ a TC-2 from a Purdey without looking at the markings.

The most important difference is there only for the trained eye to see. It is common knowledge that the famous Frederick Beesley’s patent for a bar-action hammerless sidelock side-by-side shotgun that cocks on the closing motion of the barrels is a tricky design: almost any maker can turn out a set of parts for this gun, not everyone can make it work. This is one of the highest peaks in the art of gunmaking, and the fact that the artisans of Tula could master it places them among the ranks of the best. They approached the problem, however, in a different way that was adopted at Purdey’s, and the difference in technology can be noticed by a top notch expert such as David Trevallian.

It didn’t take TsKIB long, however, to remember the “development” part of their name and essence, and create specifications for a new model based on TC-2 – MЦ-11. “МЦ” stands for “Модель ЦКИБа” (model of TsKIB), and is sometimes rendered in Latin lettering as “MC” or even “MU”, but the official approved transliteration is “MTs”. Even though specified as a model, individual MTs-11 also feature some degree of variation in design. Igor Karklinsh writes that TsKIB tried all known variations of the Purdey locks, with or without intercepting sears. A number of different top fasteners was also tried, but the standard one for MTs-11 resembles the Purdey Third Bite, but the locking element moves right and left, rather than back and forth, powered by a set of levers not unlike Greener’s crossbolt.

The action of MTs-11 was beefed up for more strength. That made the gun very heavy. There’s hardly a MTs-11 that weighs less than 3.4 kg, and most tip the scales at 3.6 to 3.7 kg. The reason was that MTs-11 was mostly thought of as a Trap and Skeet competition gun. It was, however, a few decades late to claim a throne on clay shooting grounds, as by 1960s most athletes were slowly but surely switching to over/unders.

According to catalogues, MTs-11 could come with double triggers, a single trigger, or even double single triggers (two non-selective single triggers, the front one firing first right than left barrel, the rear one in the opposite orders). It could also be fitted with a Southgate-type ejector, or, later, with a Baker-type coil spring ejector that it shared with TsKIB’s other side-by-side models. The barrels could be 750, 725 or 675 mm. long, the shortest ones usually with Tula chokes for Skeet. Most existing guns, however, are in the double trigger non ejector Trap/Pigeon gun setup, with 750 mm. barrels choked 1.0 mm. in the right, and 1.25 mm. in the left barrel.

MTs-11 were available for export. I don’t expect there were many takers, however. Neither was the gun too popular at home. While hunting in 1960s was still an honorable and popular occupation, and one didn’t need a permit to buy a shotgun, few people in the Soviet Union could afford a hunting gun that cost as much as a luxury car. Most MTs-11 were made to commemorate a special occasion, or as a gift for a VIP. The new generation of Soviet leaders that came in after the WWII loved both giving and giving hunting guns as presents, and handed them even to such unlikely recipients as Mao Zedong. Mao’s gun was finished just before the two great Communist powers fell apart, so the only source of information about it is a fuzzy captioned photo in a hunting magazine, where you can’t even see how it was finished.

The finish of TsKIB guns varied according to circumstances. The default engraving was either light scroll with color case hardening, or a game scene in German style with silver-colored action and lockplates. Usually, if the gun was offered as a present, the level of finish depended on the status of the recipient. Allegedly, there was an unwritten order of rank, with more and more relief engraving, gold inlays, combination of different chisel and minting techniques applied to produce a more and more elaborate decorations. Guns meant for real special occasions, e.g. to commemorate an event, or meant for a specific celebrity, could have unique theme engraving (although one sometimes had to have a proper background to read the messages correctly, as was the case with this TsKIB gun given to President Dwight Eisenhower: https://sportingbookworm.wordpress.com/2016/02/16/a-perfect-symbol-of-a-gun/). 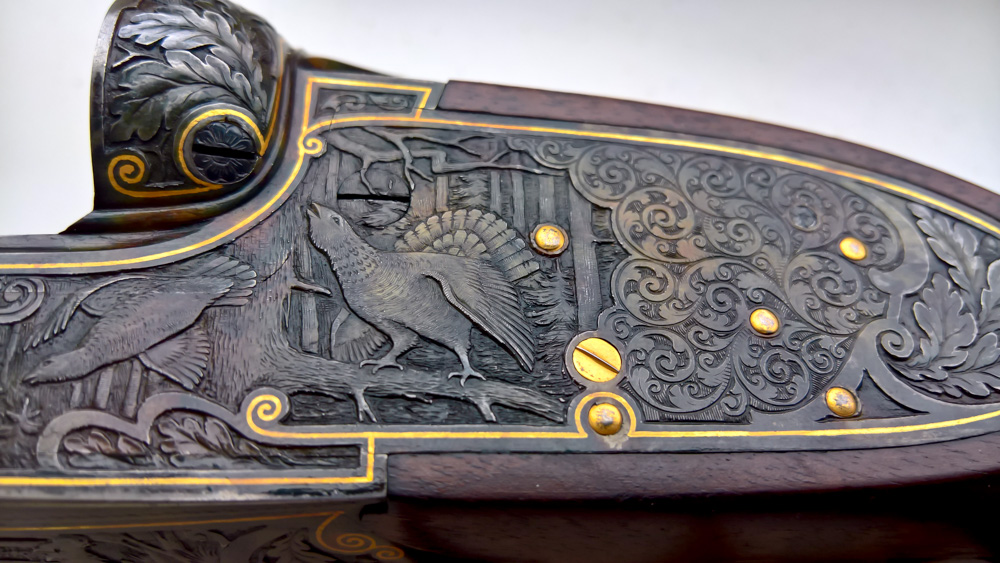