This is what I got from Miles Gilbert / Arizona:

“American single shot rifles may be out of their league in the presence of high grade British and Continental single shot rifles, but they played a very important and historic role. So, attached here is an article featuring Sharps, Remingtons, and a fine Rigby muzzle loader rifle with provenance to one of the most important rifle matches ever.”

The match was the brain child of Irish nobleman Arthur Blennerhasset Leech. A keen rifleman, he had built the first rifle range for long distance shooting at Markree Castle in County Sligo in 1859. He was Captain of the team of riflemen, with the paternal descent necessary to compete, that won the coveted Lord Elcho Shield at Wimbledon in 1873 with a score of 1195 to the English team’s 1175 out of a possible 1200 points. With that victory under his belt Major Leech challenged the Americans if they could field a team that would shoot at 800, 900 and 1,000 yards with Vernier sights. The targets were six feet high, twelve feet wide and had a three foot by three foot black bulls-eye. Under prescribed scoring the bulls-eye counted four points, the next inner square counted three and outermost square counted two points.

The American range was a tract of seventy acres that had been known as Creed’s Farm, then Creed’s Moor and finally Creedmoor. Only 15 miles east of New York City and within walking distance of the Long Island Central RR, which was induced to establish a new stop there for the convenience of shooters and spectators. Firing lines were established following the pattern at Wimbledon near London. It was 570 feet wide with 20 individual shooting pits for up to 1,000 yard distances; nine target pits on the Scoble sunken pit system for the protection of target marking volunteers; with a 25 foot high berm as a back stop.The shooters faced the north so that they would always have the sun at their backs.

The Irish team, accompanied by dignitaries that included the Lord Mayor of Dublin, set 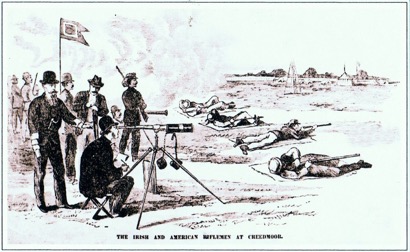 sail on September 6th and arrived in New York on September 16th 1874. In New York City the Irish went through a whirl of high-profile social engagements before practice started. On September 26th the day of the match, the winds were light, the sky clear, and a crowd of 8,000 had gathered. The first stage, at 800 yards, took about 90 minutes. The American team scored 326 points to the Irish 317. The New York Herald and other newspaper reporters telegraphed the results to their offices, where they were posted on public bulletin boards, and from there they were relayed to Britain by cable. 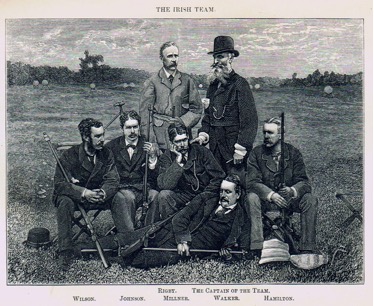 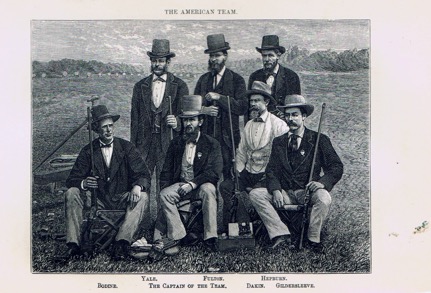 Then it was time for lunch and speeches. Irish Team Captain A. B. Leech surprised the crowd by announcing that he would like to leave a souvenir of the Irish team’s visit and uncovered a large, very ornate silver tankard in the shape of “the old towers of Ireland.” It was inscribed: “Presented for Competition to the riflemen of America, by Arthur Blennerhassett Leech, Captain of the International Team of Riflemen, on the occasion of their visit to New York.” The tankard, since referred to as the Leech Cup, was graciously accepted by American Team Captain, Col. George W. Wingate. It became a perpetual trophy for the NRA of America, and is still competed for today. 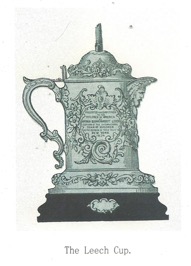 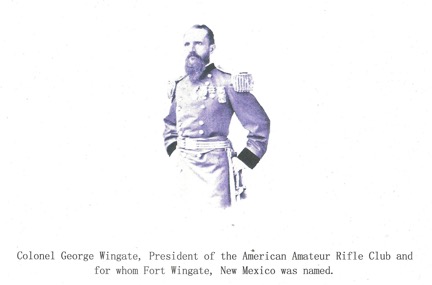 The competition resumed. At 900 yards, the score was Ireland 312, America 310. The Irish lead would have been greater but for an error by one of their members. J.K. Millner bulls-eyed his first shot at 900 yards, but on the wrong target, thus earning a zero on the shot. Total scores now were 636 for America, 629 for Ireland.

At 1,000 yards, the Irish caught and passed the Americans. The match came down to the last shot, by Col. Bodine of the United States. Bodine was about to sip a fizzy drink when the glass drink bottle exploded in his hand. In spite of the bleeding, he got into position and fired the decisive shot. A white disk rose in front of the target: it was a bulls-eye! The Irish had prevailed at the distance, 302 to 298, but lost the match by just three points, 931 to 934. John Rigby posted the highest score for the Irish, but the American team had the Leech Cup. It should be noted that Bodine loaded his Remington as a breech-muzzle loader because it was more accurate that way. The paper patched bullet was gently pressed down from the muzzle and then a cartridge case, sans bullet, was inserted into the chamber.

A week later, the NRA held its own long-range match, which provided the Irish a chance to recoup. Again the scoring was very close, but this time the Irish won, by six points. The high overall individual shooter was John Rigby. The Americans cleaned the fouling from their barrels after every shot, while the Irish fired the entire match without cleaning their muzzle loaders. This led to an impromptu 1,000-yard match between Rigby rifles and Sharps. The New York Herald reported: “Mr. John Rigby’s challenge for a trial of the comparative merits of the famous Irish rifle with the American breech-loader, 25 rounds without cleaning, virtually proved no contest. The lowest Irish score was higher than the best American.”

The score was 321 to 201, with John Rigby again posting the highest numbers. Rigby then personally challenged one of the top American shooters, Gen. T.S. Dakin, to an unusual competition: five shots from the standing position at 1,000 yards. Rigby outshot Dakin, 11 points to 7.

Of some interest are the respective dimensions of the Rigby Creedmoor rifles. None ofthem were to weigh more than ten pounds or to have a trigger pull less than three pounds, or to use set triggers. This Rigby is a .451 caliber equipped with a false muzzle. The LOP is 14 1/4” and the gun weighs 9lb, 1oz with the false muzzle removed. The sight radius is 35 1/2”.

Of course the entire Irish team used the Rigby muzzle loaders. The American team who used Remingtons included John Bodine, Henry Fulton and L.L. Hepburn who is credited for assembling the Remington Creedmoor guns. Sharps shooters were J. Collins, General Dakin, Henry Gildersleeve and George Yale. Had it not been for J.K. Millner of the Irish team firing on the wrong target at the 900 yard range, the Irish would have won the very first International Rifle Match. As noted the highest individual score was fired using a Remington as a breech-muzzle loader. Henry Fulton made 58 out of 60 points at 800 yards, but that was equaled by Dr. Hamilton of the Irish team at the same range. In terms of overall shooting the muzzle loaders beat the breech loaders at 900 and 1,000 yards. The results were hardly satisfactory to the advocates of breech loaders because they had been beaten at the extreme ranges and the Irish lost by a mistake of their team having fired on the wrong target, and it was a bulls-eye at that.

Ron Peterson for access to the rifles, his copy of A. B. Leech’s Irish Riflemen in America and 37 years of friendship.