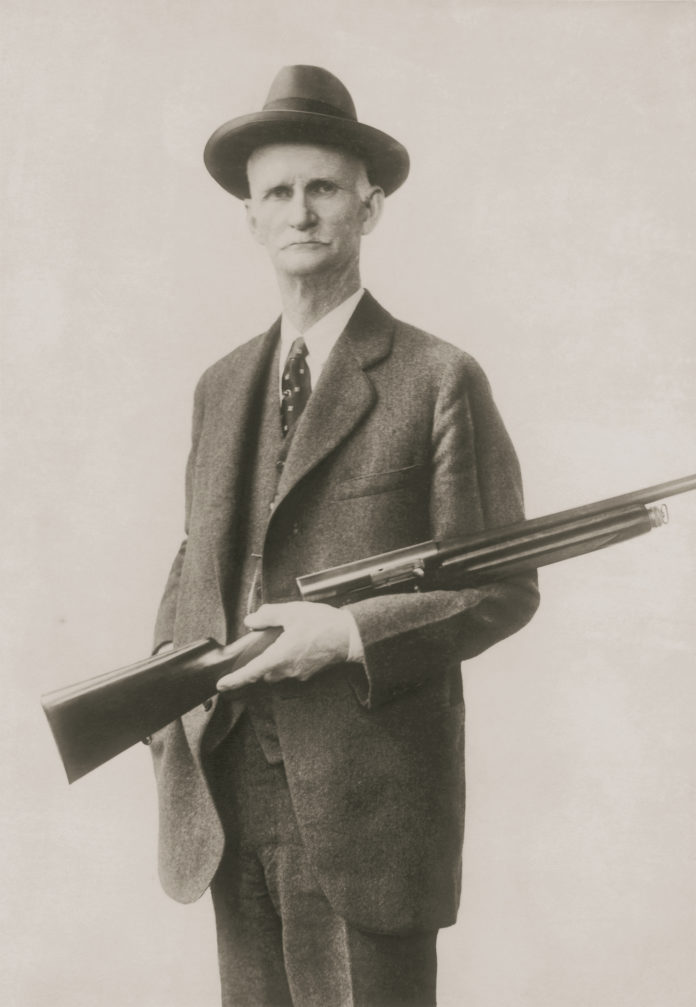 Text and photo: Jens Ulrik Høgh Vast tomes seem to have been written about just about every personality in the world of hunting, and most of these books are based on abundant source material – often straight from the horse’s mouth. However, when it comes to one of the most influential figures in our firearms history, everything that has been written is based on secondary sources. This is the incredible story of a true genius of gun design, a man whoabhorred attention and fame. Itis a little unclear whether it was on the 21st or 23rd of January 1855 that John Moses Browning first saw the light of day. He was born in the small town of Ogden in the newly established State ofUtah. His 50-year-old father, Jonathan Browning, had been baptized into the relatively new Church of Mormon 13 years earlier, and had gone to the new territories of the Wild West to search for a sanctuary where the family could practise its faith without persecution. He set up shop as anironmonger and gunsmith in the town of Ogden and took a second wife, as was customary for pious Mormons. John Moses was the first child from this relationship, and 21 years later, when his father produced his last child with his third wife, his siblings numbered 22. Ogden was almost totally isolated from the outside world during John Moses’s childhood. All transport in and out of the town was by horse-drawn wagon over a long and dangerous trail through the wilderness. Bad weather, hostile natives and wild animals all presented hazards to travellers. The town’s school had just one teacher, who taught all the children together in a single, large classroom. Other than this, John Moses never received any formal education. John Moses started to help out in his father’s workshop at the tender age of six, and also worked inthe family’s tannery. Even from this early age, it was working with guns that captured the young boy’s interest. At 10 years old he managed to cobble together a functional gun, which he then used for hunting. As the years went by, he developed his skills by undertaking repairs to customers’ guns that increased in number and complexity. An inventor’s debut In 1878, the 23-year-old John Moses, who was now responsible for running the workshop, came up with an idea for a single-shot rifle. He immediately began working on drawings and models and just 11 months later he had a fully working prototype in his hands. The rifle performed much better than any other rifle on the market, and it was clear to the young inventor that this new rifle should bepatented. He had no idea how to go about patenting his invention however, sohe turned to a supplier of agricultural machinery the Browning family hardware store had business dealings with. This supplier was kind enough to refer John Moses to the correct patent office and by 1879 J. M. Browning received the first of many patents. The Browning brothers immediately started to manufacture this new rifle. When it went on display in the shop, 25 of the guns were sold in a week for the princely $25 each! The success inspired the brothers to open a shop specialising in hunting equipment and guns. During the next few years, things went incredibly well for John Moses, but he lacked the capital to develop all his ideas. The solution came from an unexpected direction. One day in 1883, a travelling salesman for Winchester found a used example of one of Browning’s rifles, which he immediately bought for $15. He presented this rifle to Winchester’s board ofdirectors, and within a week the board had decided to attempt to buy the production rights to the firearm, which had impressed them deeply. It was none other than Winchester’s managing director, T.G. Bennet, who was sent on the journey out West. His mission was to negotiate for the production rights with the totally unknown firm “The Browning Company”.Bennet arrived unannounced and found the Browning brothers working hard at their machines. Hegot straight to the point, negotiations for the production rights took place over the shop counter, and a contract was signed there and then. Browning gave Winchester the full rights to his single-shot rifle for the staggering sum of $8,000, equivalent to around $750,000 today. This money enabled Browning to really start expressing his creativity.“Like shit from a shovel”When John Moses was working on one of his inventions, he worked on the whole process from the initial idea to the prototype himself. He sometimes produced technical drawings and small wooden or cardboard models, but usually he quickly started to produce functional prototypes, which would then be subjectedto all kinds of testing and even outright abuse. At times he found it difficult toobtain materials and equipment for his workshop, sohe used whatever he could get hold of. Amongst other things he used a great deal of scrap metal, which he would then harden and heat-treat – skills he had mastered to perfection. He often took part in shooting competitions – and was one