Across much of the eastern and central United States, there is a small game bird that many hunters and people in general never see, because of its perfect camouflage, the North American woodcock.

In many ways this is the King or Queen of gamebirds. It is a challenging target, and it offers hunter and bird dog the nearly perfect opportunity to work together. It holds as well or better to a point than any bird on the continent. It wonʼt run nearly as often as a pheasant, and it wonʼt flush wild nearly as frequently as a ruffed grouse. From Minnesota and Wisconsin to Maine and all the way south to Louisiana, this wonderful migratory game bird thrills the bird hunters who know it. Some even call the little woodcock “big game”, not because of its size, but because of the rich, delicious flavor of its dark breast meat, which I skin and bake in the oven for about 20 minutes in heavy cream. I have hunted these wonderful birds from Maine to New York to New Jersey, where they migrate across Cape May to Delaware on their annual flight south.

This November I got out for several days of woodcock hunting in Cumberland County, New Jersey, bordering the Delaware Bay, directly on the woodcockʼs path to their winter home in the deep south. My three days this year are a good example of woodcock hunting along the flyway, the first two with my son and the third day with an old friend, and all three days with fine Brittany Spaniels. On Veteransʼ Day (November 11) and the following day, my son, Scott, and I took to the woods of Cumberland County bordering the extensive farm land on the New Jersey side of the Delaware Bay. One of the unique aspects of hunting in Cumberland County is that the hardwoods, pines and thorny brambles are also interspersed with holly, gone wild and rampant in the South Jersey woods, since early English settlers brought it there close to four hundred years ago. Speaking of brambles, brush pants and a tough shirt or jacket are a must for hunting in this area, where you sometimes have to push through sharp thorns to get to the woodcock. On Thursday, Scott and I hunted the first cover on one side of a small lake with not a flush. Moving to the other side of the lake we flushed several in the brush, yours truly starting the day off with a clean miss on a woodcock that shot up from the ground and cleared the tree tops before crossing to the woods on the other side of the next field. We ended the first day with three birds. The next day, we tied into more birds resting in an overgrown field dotted with cedars, before continuing their flight south. We came out of the woods with four birds, for a total of seven for the two days.

The daily limit is three per hunter in New Jersey, and if you happen on a spot where a flight of migrating birds have just dropped in, you can shoot the limit in ten minutes. Or you can hunt hard all day for a bird or two or none, if the birds have moved on south, as had happened the following Saturday, when I came back to Cumberland County with my old friend, Lou. 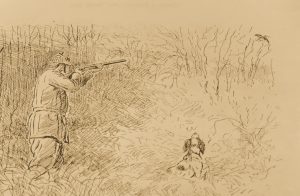 For me the hunting is about the dogs, the companionship, the beauty of nature and the guns used in the chase. In my case, for years Iʼve only hunted with old guns that have seen the test of some serious time. On this past Novemberʼs happy father and son occasion, I hunted with my Lefever Durston Special 20 gauge, which came out of the Lefever factory in Syracuse, New York, around 1912, at a retail price of $35. For the day, I loaned Scott a 16 gauge Ithaca Lefever, Nitro Special, which he decided to try for the day instead of his L.C. Smith 16 gauge. A friend of mine gave me the Nitro Special years ago, which was in turn given to him by his father, who bought it for $25, second hand in Texas in the 1930s, where my friendʼs dad was working on oil rigs.

Scott and I enjoyed our 2010 woodcock hunt, as you can see from the photo.

At the end of the second day, I celebrated our time together by giving him the Nitro Lefever. My father taught me to shoot and was the first person I ever went hunting with, looking for a big buck in the woods of Vermont. Somehow it seemed fitting to celebrate this past Novemberʼs woodcock hunt with Scott by having the Nitro Lefever make another father to son transition. Judging by the expression on his face, I think I may have also passed along my love of woodcock hunting.